The building that houses La Bonne Franquette today dates from the end of the 16th century, like most buildings in Montmartre, which were rebuilt after the fire of 1559 that ravaged the village of Montmartre. At that time, the windmills' sails were turning, large fields of wheat grew on the plain and the slopes of La Butte were planted with vines. The street in which the building stands was originally a path, probably dating from the 11th century, which served as the boundary between the Saint-Denis and Montmartre estates. 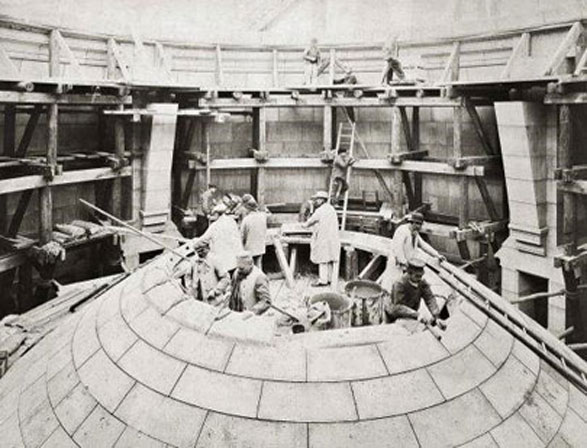 Montmartre becomes the "Mount of Martyrs"

It was in 1867 that this street was re-named Rue Saint Rustique, after the companion of Saint Denis, first bishop of Paris, who was decapitated in 250 AD near the current site of Place des Abbesses, with Saint Rusticus and Saint Eleutherius. It is because of these three executions that La Butte, which was then called "Mons Mercurii" because a temple to Mars stood on the current site of the Eglise Saint Pierre, was renamed "Mons Martyrum" by the good King Dagobert I, around 630 AD. Over the centuries this name has become deformed, and subsequently became Momartre, Motmartre, Mont Marthe, Mont-martre and finally Montmartre. 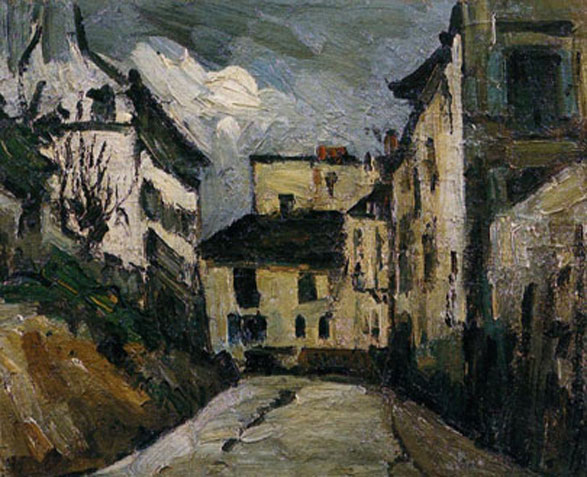 A meeting-place for Cézanne, Renoir, Gauguin and others

In the 19th century, large numbers of artists moved to Montmartre, chased from the Left Bank by Haussmann's restructuring of the city. They were drawn here by the bohemian atmosphere and the cheap rents for studios. They frequented the inns and cafés that welcomed them the most, and would exchange paintings, drawings, engravings, sculpture or poems for food and drink. As such, painters like Pissarro, Degas, Sisley, Cézanne, Renoir, Gauguin, Van Gogh, then Toulouse-Lautrec, Suzanne Valadon and her son Utrillo came to refresh themselves under the shady arbours of the restaurant, which was then called "Aux Billards en Bois". Eventually they were joined by Poulbot and other writers and poets. They would chat about their projects while playing billiards in the garden. This is how Renoir came to paint his famous painting "Le Bal du Moulin de la Galette" in this very spot, in 1876. 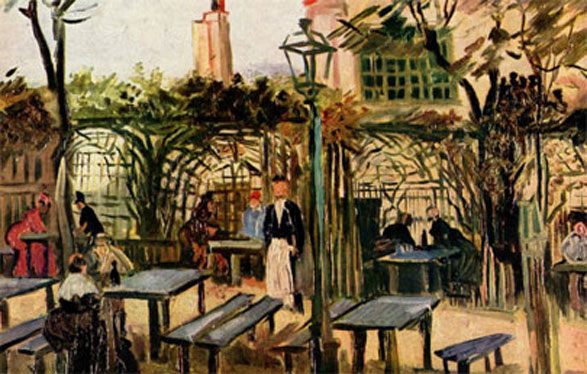 In the autumn of 1886, Van Gogh, who lived with his brother Theo at 54 Rue Lepic, discovered Aux Billards en Bois and its garden. Here, his young friend Toulouse-Lautrec invited him to drink absinthe. During the two years that he spent in Montmartre, Vincent created more than 200 works, including paintings and drawings of varied subjects: landscapes, still lifes, portraits and self-portraits. In the garden of the restaurant that later became La Bonne Franquette, he painted his famous small painting "La Guinguette", which now hangs in the Musée d’Orsay.

Still a haunt for artists in the 20th century 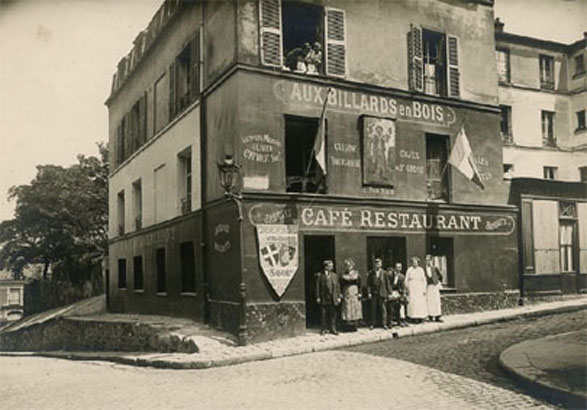 At the start of the 20th century, Francisque Poulbot was a regular. Here, he founded the "Association fraternelle des joueurs de billard en bois" [the Fraternal Association of Billiards Players] with his friends Henri-Paul Gassier, a draughtsman, caricaturist and co-founder of the satirical magazine, Le Canard Enchaîné; and Pierre Dumarchey, soon to be known as Mac Orlan. They confronted each other around this 5-metre-long billiard table under the arbours, using a champagne cork as the white ball. The winner had to buy drinks all round. Thus restaurant made its name as "Aux Billards en Bois" in films, magazines and in the annals of the early 20th century.

It was in 1925 that the premises became known as La Bonne Franquette, reportedly due to an idea of Francisque Poulbot's. This name has survived up to the present day.

Even then, the restaurant was already being advertised thus: "La Bonne Franquette Inn is the most comfortable and merriest establishment, with the most sophisticated cuisine and the most reasonable prices –Lunches-Dinners-Suppers". 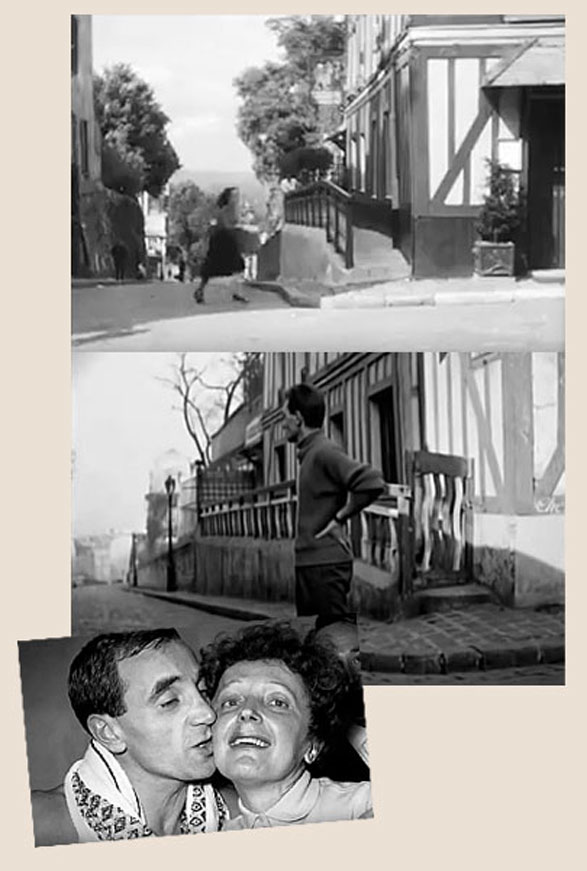 At that time, half-timbered decor represented the trend for country tradition. From 1932 to 1938, Édith Piaf, who had been brought up in the working-class areas of Belleville and Ménilmontant, lived in Montmartre. She appeared in various cabarets including Le Lapin Agile, as did Rina Ketty. In 1941, she came back to La Butte to make the film "Montmartre-sur-Seine", directed by Georges Lacombe and starring Jean-Louis Barrault, Roger Duchesne and the young Paul Meurisse. This romance was set among the main sites on La Butte, including La Bonne Franquette.

In 1946, Piaf discovered Charles Aznavour, who was then making his début in the cabarets of Montmartre and Pigalle. In the mid-fifties, he lived in the same building as La Bonne Franquette. He lived here for several years with his second wife, Èvelyne Plessis, who stayed on after their separation. 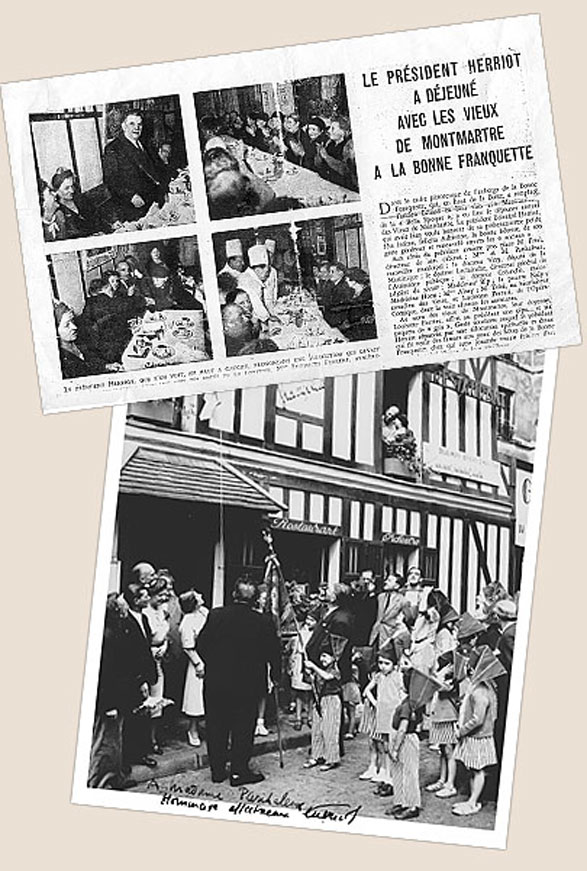 A President of the Republic at La Bonne Franquette!

Up until the middle of the 1950s, La Bonne Franquette, which at that time had rooms upstairs, was run very dynamically by the larger-than-life Adrienne. She was a well-known figure on La Butte between the two World Wars, a friend of aviators and notable politicians.

Every year, Adrienne organised "Le Pot-au-feu des Vieux", an early version of the meals served to needy people by the modern charity "Les Restos du Cœur". Adrienne also mobilised members of the Free Commune of Montmartre to collect warm clothing at the beginning of winter. Here, Adrienne had the honour of meeting President Edouard Herriot at the annual dinner of 1950. The press reported the gift given to the President by the doyenne of Montmartre people, Louisette Ferrère: a pipe and 6 packets of tobacco. 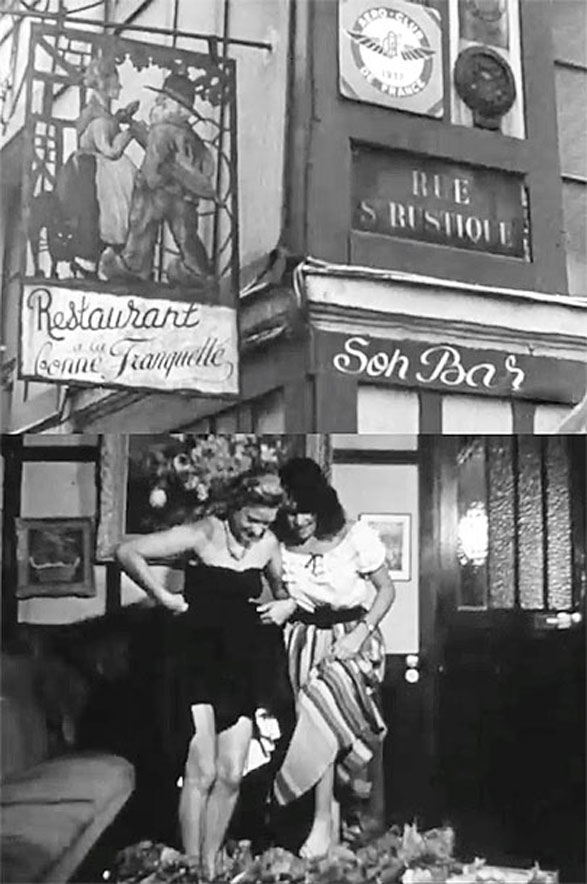 In the same year, after the neighbouring vineyard had brought in its grape harvest, the Grape Harvest Festival took place at La Bonne Franquette, where the harvest was taken. The grapes were put on a carpet, and two beautiful young women from Montmartre pulled up their petticoats and started treading the grapes in their bare feet to a frenzied rhythm! For this occasion, La Bonne Franquette created a special vintage: the wine was poured into two bottles with a label representing Truman and Stalin. In the middle of the Cold War, the Presidents of these two great military and political blocks were depicted drinking to the success of the Montmartre wine, and to peace! 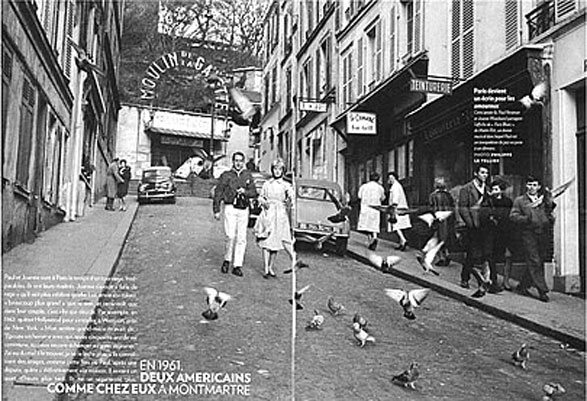 In 1955, Adrienne sold her business to Maurice His, who wanted to turn it into a glamorous Montmartre hotspot that would be the talk of the town. Its launch in 1956 was covered by the Parisian press. Newspapers and magazines reported the menus made up of chef's pâtés, tripe, Armorican lobster, Chambertin chicken, trout and much more, all washed down with good wine. Artists like Bernard Dimey, Jacques Brel and François Deguelt, who often appeared at the cabaret "Chez ma Cousine", sometimes sang here.

A new clientele discovered La Bonne Franquette: American movie makers. Metro Goldwyn Mayer set up an office in Rue d’Orchamps, in a house that would later be owned by Dalida. Artists who were filming in Paris, like Paul Newman, Faye Dunaway and Yul Brunner, discovered Montmartre's charm and lit up the exclusive nightlife at La Bonne Franquette.

Once his plans were a success, Maurice His extended the restaurant along Rue des Saules, into the garden which descends to Rue Cortot, thus creating a sort of "guinguette" or open-air café and dance floor. Colourful and charismatic, Maurice His became the 7th President of La République de Montmartre from 1973 until his death in 1993. His son Jean-Pierre His was to become the 9th President, from 2002 to 2006.

In 1959, Maurice His auditioned a young singer, Natacha, for his cabaret. She sang songs by the great French songwriters of the era: Aznavour, Béart, Bécaud, Gainsbourg and the Montmartre man Bernard Dimey. She became his wife, and thus owner of the establishment... which she still frequents today. Sometimes she still entertains with her captivating voice, which is still as fresh as ever. Even today, her legendary rendition of "Syracuse" continues to delight us! 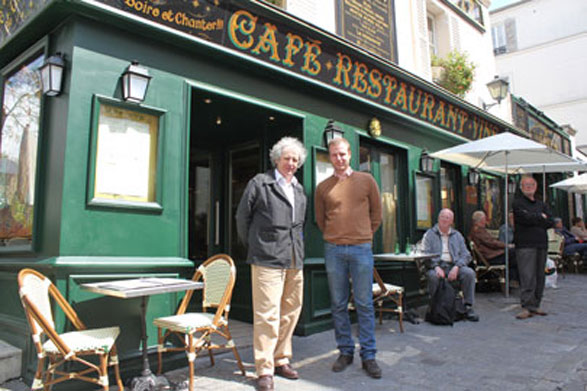 The Fracheboud family takes over La Bonne Franquette in 1971

After several changes of hands, the Fracheboud family, originally from Samoëns in Haute-Savoie, took over the running of the restaurant in the 1970s. They were keen to remain true to the name of "La Bonne Franquette": a cheery, cosy place, as welcoming to Montmartre locals, Parisians, artists, artisans and winemakers as it is to tourists and visitors from home and abroad. 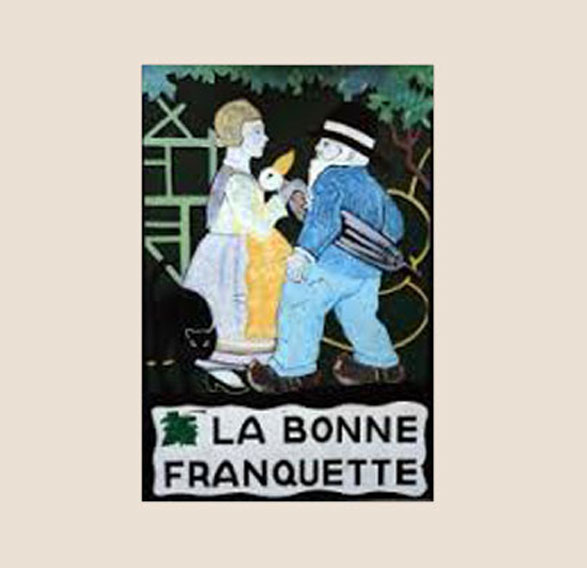 Thus this place has become a historic Montmartre institution, under the name of "Aux Billards en Bois", "Le Franc Buveur", "L’Ange", "Le Ranch" and since 1925, "La Bonne Franquette". Over the years it has been an inn, a restaurant, a bistro, a wine bar, and a cabaret.

Its motto "Love, Eat, Drink and Sing" displayed on the façade and in its rooms reflects the spirit of this place. Its rich heritage is that of Montmartre in its golden age of artists.

Re-live the history of Montmartre!
Visit Montmartre
Depending on your interests, the Tourist Information Centre will suggest various walks around modern Montmartre and on the trail of its past...